The thing that breathes on your neck in the dark, the voice that whispers in the dark and the hand that softly brushes the foot you’ve foolishly left outside the duvet at night, all present intriguing psychological dilemmas for us not dissimilar to some people’s relationship with God.

As a dedicated sceptic, despite my recent encounters with my own night-time visitor, I have always been fascinated by the dark, frightening, creeping thing in the night, the fear that stalks just out of sight, the haunting and the shiver down your spine. I am no psychologist but like most people, I have an understanding that these things are really our own inner fears and insecurities coming to the surface as we fade in and out of sleep…or are they?

Look, I’m a writer and one who particularly enjoys delving into the darker matter of the soul, so perhaps I spend more time considering such matters than most. I need to feel my readers fear, to understand what I have to do to make them believe that the slender, outside edge of a ghostly little finger, just softly slid down their spine as they turn to the next page. I’m not specifically talking about horror, in all my books, I still revel in delight when I know I’ve hit the mark and sent a chill down someone’s spine.

One of my favourite spontaneous Halloween memories is from when my children were small. We were at a party and I found a torch. I switched off all the lights and sat in the dark with the torch under my chin and asked “who wants to hear a story.” The kids all gathered around in a circle on the floor and I proceeded to scare the living bejesus out of every one of them. You cannot begin to imagine the squeals. It was a combination of fear and delight and I look for that in my writing.  On that occasion I could see the fear, fun and excitement in their eyes and even though I can’t see my reader when I write, I do my best to recall such interaction to bring the excitement to life on the page. I’ve always enjoyed story telling.

When I was a small boy, (true story) my grandmother came to stay with us and as we lived in a small house, she ended up taking my bed. I had options but the most attractive one was to sleep alone in front of the fire downstairs in a sleeping bag. It was a camping fantasy and my imagination was quite capable of placing me in the Amazon surrounded by a menagerie of wild animals.

Now I like the rest of the world have had nightmares and bad dreams but what happened that night, felt so real to me that it stuck with me. The fear I felt, the cold, bald terror makes me shiver just recalling it almost fifty years on. My sleeping bag was old and blue and the zipper was a nightmare. It caught at every tooth and had to be very carefully handled so it wouldn’t break completely. It took forever to move it a few inches up or down. As I recall I awoke in the early hours at a time my more recent shadow man seems to favour.

I lay there watching the embers in the grate. It was almost completely dark save the very low glow from the fire, when I felt a cold breath on my neck. The thing that leaned close in the dark, was real and terrifying and it whispered my name in the night.  I squeezed my eyes tight for a moment and when I opened them, the sleeping bag had been opened just a little at the top and the flap folded neatly back.  It was then I saw him. He had form and no form and he faded into the corner before disappearing.  I remember he had an accent, one I couldn’t place and I was genuinely terrified.

Now I know you’ll think, yep he was dreaming.  Think what you will, that was one of those moments that I believe was real. We all have them and despite what I have just said, I am still a denier when it comes to ghosts and ghouls and things that go bump in the night, and yet… I have an even stranger one for you.

My maternal grandmother was religious and when I travelled abroad, she gave me a small collection of religious artefacts to carry and keep me safe.  Most people go with the old St. Christopher medal as he is the patron saint of travellers, but not my Gran. She gave me a Miraculous Medal inside a little orange pouch as she was a big fan of the Holy Mother, a small piece of blessed palm that she got from her local church and a picture of Padre Pio.  She was a big fan of the Padre. I took all three, unholy devil that I am, but out of love and respect for my Gran, I placed the Pardo Pio Pictures in a plastic sleeve and shoved it into the inner pocket of my wallet, tucked inside the little orange pouch. There they stayed until my mother died.

Now here is the odd thing.  No one knew I carried these things with me and after her death; I did something I hadn’t done in years. I tried to pray. It was an empty, foolish thing for a young man in my state of mind and it was a half-hearted hopeless gesture.  My heart had been broken and I was so devastated that I would have turned anywhere for solace.  I remembered the little medal my Gran had given me and thought I could pray to the mother of God to give me comfort.  I had after all lost my own mother and my deeply engrained, early strong religious teaching, led me to it with ease.

When I opened my wallet I pulled the little pouch and sleeve from the back pocket. They had been there so long, they were partially stuck but they came out without too much trouble.  I put the sleeve to one side and I opened the pouch with the medal inside. Just as I expected, there was a medal with the form of the Blessed Virgin Mary, all dark and marked as I remembered it. This had been a well weathered, often handled possession of my grandmother after all. But then I saw the second medal.  It was brand new and shiny as if it had just been made. I picked up the sleeve and shook it and the piece of palm fell into my hand.  I reached inside and pulled out the little picture of Padre Pio.

It was battle-scarred from being bent and frequently sat on, as I carried my wallet in my back pocket.  As I held it, I rubbed my thumb across the little card and something even stranger happened. A second identical card slid from behind it. Only this one was immaculate. No crease marks and crinkles as it should have had like the other one. 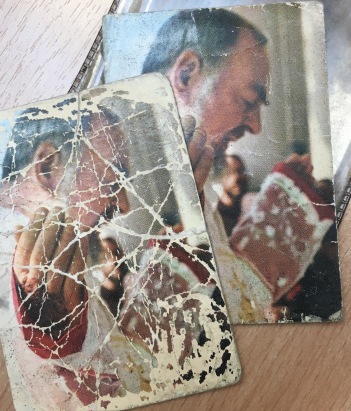 Now like I say, I am not religious and I am completely sceptical about all things that suggest spirits or ghosts, but the duplicate medal and picture were impossible to explain. I tried to create a logical explanation for this but I couldn’t. The religious gifts my gran gave to me were handed over one by one, a memory that is clear and unambiguous and I had handled each item multiple times before tucking them away in that little plastic pocket. No one could have known they were there and certainly would not have had access to my wallet, so it was unexplainable at the time and remains so today.

A strange follow-on thing then happened. I placed the surplus medal in my car.  I honestly don’t know why but it felt right.  I have over the intervening years lost the medal three times and within a day, I have found another, in the most innocuous places. Despite my lack of religiosity, I still have one in my car and one in my wallet today.

I guess we all have a story of the shadow on the stairs or the voice in the night and while I am the world’s biggest naysayer when it comes to everyone else, I can’t explain my own experiences so it leaves me with a dilemma of sorts.  But here’s the thing… Remember I said I had a miraculous medal and then I found a second one which I leave in my car – the one I cannot lose?

Because I’m writing this blog and as I am writing it, I was drawn to open my wallet to look at the small collection of religious items my dear departed Gran gave to me. The first thing I did was look at the Padre Pio pictures – no change there. But now this is where something very strange has happened and I guess you have to wonder if I am telling you the truth or if I am just a good spinner of tales.  There should be one miraculous medal in my little pouch and one in my car. I know there is one in my car because I saw it this morning.  Seeing it, gave rise to me writing this piece in the first place.  But the remaining lone medal in the pouch… I simply had to take a picture because even though I’m looking at it, I still don’t believe it…and here it is…  I will leave it up to you to speculate on this one – Uno-dos-tres? What do I think?…What do you think?…